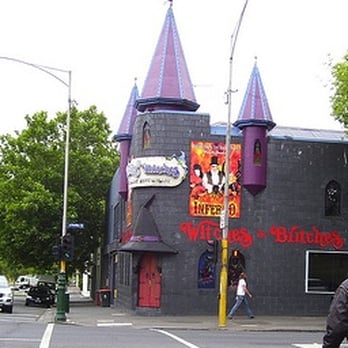 Witches in Britches, a musical-theatre restaurant, located at 84 Dudley St, West Melbourne VIC 3003, Australia which operated for decades was raided by police on September 20, 2016 after they received a tip from a concerned staff member. The raid was conducted to follow up on a variety of improprieties that had been reported over the months concerning the business practices of this long running Halloween themed theater restaurant.

Witches and Britches had been a lively tourist attraction which operated for nearly three decades medieval themed castle. Patrons were charged a set price for dinner and show which was popular with locals as well as tourists.

The police discovered that the witches were indeed stirring a witch’s brew in the back room where they discovered 450 liters of fake alcohol and a room full of empty branded bottles that were being filled with the illicit witch’s brew.

The Melbourne attraction had a series of financial setbacks in recent years which may explain but not excuse the illicit behavior which put the health of their customers in extreme jeopardy. The police reached out to Distiller Jim Beam to test the confiscated fake liquor that was being brewed by the witches.

Stuart Gregor, president of the Australian Distillers Association, in an interview with 3AW Radio in Australian said, “With distilling, there’s the good alcohol we like called ethanol and then there’s a very dangerous and deadly alcohol called methanol,”

The police blotter was not specific with the brand of liquor being imitated but it is likely because they reached out to Jim Beam that it was a brand that they were able to test and verify. With Mr. Gregor, who was familiar with the results commenting on methanol, the results of the test most likely resulted in a finding of methanol in the fake alcohol.

Provide any reports or tips of Fake Alcohol via our secure form. Or call toll free (833) SAFE-TIP
SafeProof’s goal is to raise fake alcohol awareness an provide alerts to keep the public safe.
Please sign up for Liquor Alerts and help keep you and your drinks safe! #DrinkSafe

Send this to a friend