On August 15, 2019 the State of Israel Ministry of Health (The Ministry) issued a Press Release warning the public of dangerously high levels of methanol found in retail liquor offered for sale in supermarkets and kiosks throughout the Country.

The most recent advisory issued by the Ministry of Health cited four recent incidents throughout the months of July and August 2019.

From the official press release by The Israel Health Ministry:

In August 2019 an anonymous person was reported dead as a result of methanol poisoning, his blood measured methanol in a concentration of 30mg.

In August 2019 a woman was reported to be hospitalized in the Sheba Medical Center due to methanol poisoning, her blood measured a concentration of 14mg of methanol, the physical manifestations of poisoning were multiple vomiting, difficulty breathing and damage to vision.

In July 2019, a man was reported to be hospitalized in the Assuta Ashdod Medical Center because of methanol poisoning; the physical manifestations of the poisoning were multiple vomiting, difficulty breathing and blindness.

In June 2019, a mortality incident was reported apparently as a result of methanol poisoning.

Since the beginning of 2018 The Ministry has investigated 13 deaths and 5 cases of blindness that resulted from methanol poisoning. These cases where confirmed by lab examinations and toxicology tests. The Ministry believes that the number of cases is much higher due to a lack of awareness and reporting by medical professionals, victims and their families. In the advisory press release The Ministry states that their numbers are based on “incidents that were said and examined in a lab, in practice, the estimation is that the number of events is significantly higher.”

Noting that various government agencies are tackling the problem jointly, The Ministry stated that the Standards Institute of Israel along with the Ministry of Economy (Industries Administration) are in the process of updating the denaturation alcohol regulations following the lead of European countries.

Recently in Costa Rica authorities seized over 55,000 bottles of tainted alcohol that had entered the normal supply chain of alcohol distribution. Twenty -five deaths were attributed to the counterfeit alcohol that was sold at retail establishments throughout the country.

Israel also suspects that the tainted alcohol infiltrated the normal supply chain and was being sold along side authentic alcohol. On July 7, 2019 an inspection of “Across city hall” mini market on Weizmann St 144 in Kfar Sab was undertaken where inspectors confiscated 79 bottles of alcohol from 8 brands for testing confirmation while the licensing of the retailer is examined for prosecutorial action. The Ministry investigation will continue with the aid of law enforcement agencies as they examine other retailers throughout the region.

SafeProof.org has consistently warned consumers purchasing alcohol to be aware of outward signs that liquor bottles are counterfeit and may contain methanol and other harmful industrial chemicals. When purchasing alcohol from retail establishments consumers should always examine the bottles for these signs that the alcohol is NOT authentic:

In these pictures taken by The Ministry at the seizure of liquor on the shelves at Across city hall” mini-market on Weizmann St 144 in Kfar Sab all of these outward signs of fake alcohol are visible. 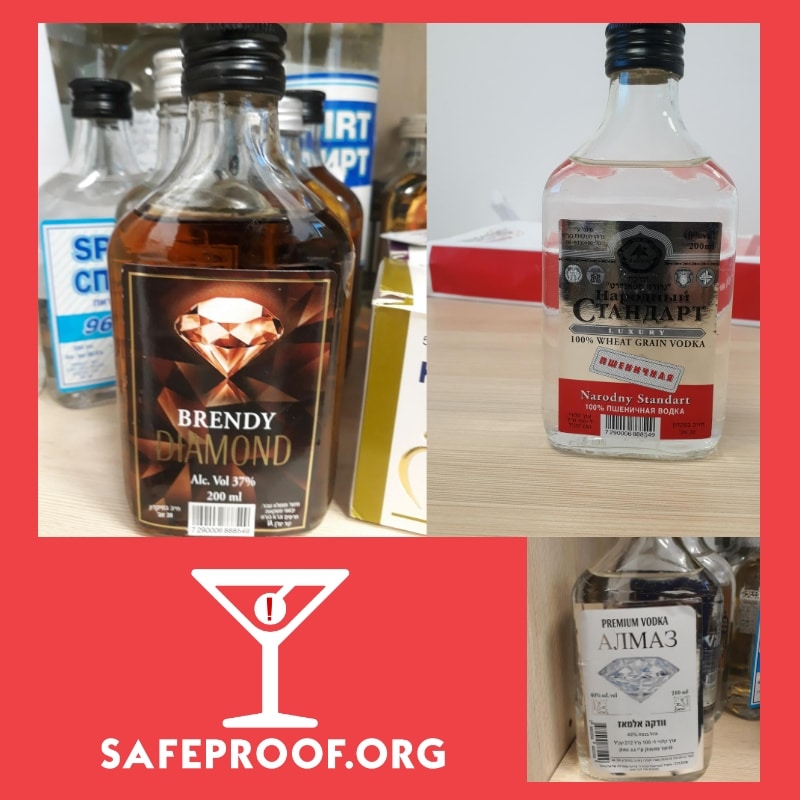 The Ministry offered their list of telltale signs of Counterfeit Alcohol that consumers should be Aware of:

In investigating the possible death of a resident of Dimona from methanol poisoning The Ministry in conjunction with The Ministry of Economics, the Southern District Food Services and local enforcement authorities conducted a sweeping inspection of establishments selling alcohol. This combined investigative task force visited over 20 supermarkets and kiosks in the area. The results of this task force investigation into the sale of fake alcohol in established retail channels were published in a Press Release issued by The Ministry on April 16, 2019.

The Israeli revelations along with the recent Costa Rica experience of the alcohol supply chain being infiltrated by counterfeit alcohol is a clear warning of the danger of tainted alcohol being sold at the retail level by “trusted” sources.

The USA and Canada believe that their supply chains are immune from infiltration of tainted alcohol, however, the experiences of Israel and Costa Rica should lead them to question that assumption. Authorities, Medical Professionals and Consumers should not assume that the problem of poison alcohol is limited to the third world. Australia, Ireland, England, Germany, Russia, Turkey, Greece almost a hundred of other countries have all experienced the tragedy of deaths, blindness and disabilities from the consumption of counterfeited alcohol brands.

Follow our Fake Alcohol detection tips and always be suspicious of low cost ‘premium’ spirits. Carefully inspect labels and make sure the glass bottles are authentic and have no unusual marks.

SafeProof.org is a consumer advocacy group, funded through donations from concerned individuals, industry groups and alcohol brands. The goal of SafeProof.org is to raise awareness about the prevalence of counterfeit alcohol throughout the world. Our Alcohol Articles highlight alcohol related stories using worldwide news outlets and official government sources. Report any illicit alcohol activity to us using our secure form or by calling (833) SAFE-TIP To get the latest Alcohol Alerts and violation updates in your area Sign-up for SafeProof.org emails and follow us on Twitter and Instagram @SafeProof